In winter/spring 2020, the civil engineering company Helmut Lübben Fernmeldebau GmbH began the third of eight construction phases in in the Upper Bergisch region of Germany as part of the nationwide broadband expansion project funded by the federal and state governments: they successively installed the fibre optic cables along the road and, as requested also produced the house connections. The latter was also due for the two semi-detached houses no. 47 in the narrow but busy Marienheider Straße: Here the two landlords were eagerly waiting for the “fast internet” and thus also for the installation of their house connections. The two of them experienced live that this was going to be a special, fast and, for the large, lovingly designed front garden, an absolutely gentle construction measure – and they were amazed. 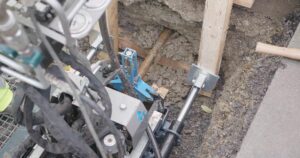 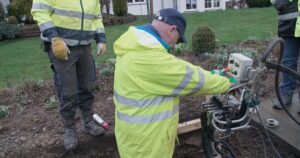 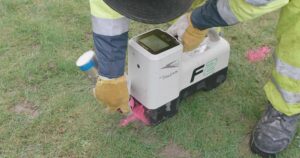 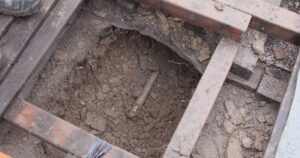 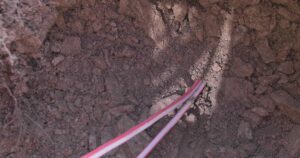 Managing Director Helmut Lübben was also quite astonished, as he personally arrived from the far north to see the trenchless installation of this house connection with a steerable mini drilling rig, the GRUNDOPIT PS40. His company has so far always successfully established trenchless house connections using soil displacement hammers, but unlike the GRUNDOPIT drilling systems, these are not steerable and thus cannot be used everywhere. So the TRACTO TECHNIK team invited him to this practical demonstration, which was also the first external use of the new GRUNDOPIT PS40 generation, to demonstrate the decisive advantages of this steerable mini drilling rig. These are:

STEERABILITY IS THE MAGIC WORD

At house 47 in Marienheider Straße, the steerability of the drill head was required for the construction of the house connection (30 m length for PE protective pipes DA 12 mm) due to the bore path. Directly at the narrow edge strip road/border front garden of house 47, under which the fibre optic infrastructure is located, the flat starting pit with dimensions of only 1.00 m x 1.20 m was quickly laid out; parallel to this, the target pit with approximately the same dimensions directly at the house. The mini drilling rig was quickly, easily and stably clamped and adjusted on the hydraulic pit starting frame with the side-mounted work plate in the starting pit. Now the small distance of only 14 cm between the drilling axis and the pit floor, which allows drilling directly above the existing pipeline network, was clearly visible. The rod magazine for the 30 m long fluid-assisted bore was within easy reach, the drive unit within sight.

EASY JOB FOR THE LITTLE HIGH-FLYER

Now the bore could start: Helmut Lübben and his team, as well as the onlookers on the fence, watched intently as the pilot bore started, only rinsed with water and constantly monitored via the sensor in the drill head. The DigiTrak F2® location system reports every change/deviation in direction so that the position of the bore head can be corrected immediately if necessary.

Due to the coarse stony ground and the slope, one or the other directional correction is necessary, but this is done quickly. The  drill rod coupling on the rotary drive is also fast and productive thanks to aquick-release drill rod connection. One rod after the other “disappears” into the drill channel; the operator has everything in view. After just under an hour – interrupted by directional corrections, explanations and clarifications – the pilot bore reaches its destination. Helmut Lübben is thrilled when, after 30 m, the drill head emerges in the target pit: “I was a little sceptical, but the actual precision landing of the drill head in the target pit convinced me and I am impressed.

The PE protective pipes OD 12 mm (so pilot bore hole while the rods are being retracted. The house connection is thus optimally prepared for blowing in or pulling in the fibre optic cable, and the two landlords are surprised that this was done so quickly, easily and, apart from a few footprints in the front garden, without any damage to the meadow.